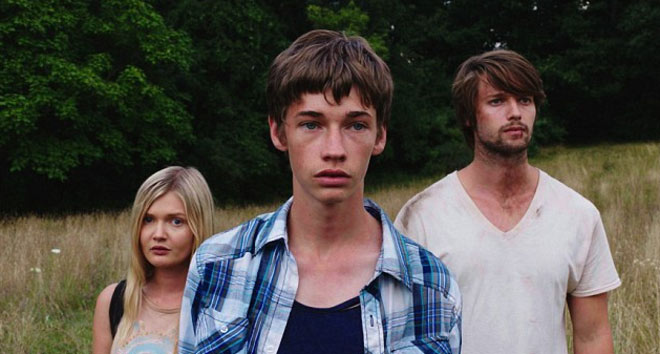 Posted at 15:56h in Uncategorized by mittun

Note: This was originally posted on January 13th, 2017 on We Got This Covered

These days, it feels as if there’s an apocalypse just around the corner: whether through war, climate change or just the slow implosion of civilization. You look at the kids who’re going to have to sift through the mess we’ve left behind and pity them. Their misery fuels Matthew Ogen’s Go North, which is essentially Lord of the Flies meets Cormac McCarthy’s The Road.

Some kind of undefined calamity has wiped out everyone over twenty, and we meet a scruffy bunch of teenagers who’ve banded together as a tribe in the aftermath. Based out of a dilapidated school, the older kids teach the young survival skills: how to trap food, set broken bones and disarm IEDs. The leaders rule with an iron fist, using the children for slave labor and subjecting them to draconian rules. It’s a rough, depressing and harsh life, but hey, it beats a violent, lonely death in the wilderness.

Even so, Josh (Jacob Lofland) is having second thoughts, despairing of the brutality the older kids put him through and fantasizing about a better life in ‘the North.’ After witnessing an attempted rape and realizing there’s no way everyone here will survive the winter, he decides to leave and try his luck in the wild. He’s joined by Jessie (Sophie Kennedy Clark), a girl who’s similarly tired of the tribe. And so the pair set out into what’s left of the world, hoping to find something better.

Shot on location in the abandoned, graffiti-covered industrial ruins of Detroit, Go North finds a quiet beauty in these crumbling buildings. DP John Tipton cranks up the contrast and color saturation, always ready to capture an artful lens flare or accentuate the texture of paint gradually peeling from the walls. This stylized photography gives the film a dreamy, fairytale quality – this is humanity fading away rather than burning out.

Interestingly, the closest companion to Go North isn’t a film at all, but the video game The Last of Us. Aesthetics, tone, and atmosphere are identical – from the plaintive acoustic guitar picking that accompanies the devastation, the curious beauty of nature reclaiming industrial ruins, to the nihilistic sensation that humanity is too far gone to be saved.

Perversely, the interesting scenery and general ruinous tone make for some pretty big narrative problems. We see our teenage protagonist in pre-collapse flashbacks, looking much the same as he does now and, as the narrative develops, we gather that the oncoming winter might be the first the survivors have experienced. This doesn’t quite jive with the ruined aesthetic – everything looking as if it’s withstood about a decade of rot.

Along similar lines, the cast looks a tiny bit too perfect for desperate ragtag survivors. In particular, Sophie Kennedy Clark looks as if she’s just walked off a fashion shoot rather than spending months doing backbreaking agricultural labor in a labor camp. She’s even wearing Converse – sure they’re comfy, but as a seasoned wearer I know they’d last about ten minutes in the wilderness. Various little unconvincing qualities apply to most of the rest of the cast, who all look a bit too white-teethed and well-fed to be credible as hard-bitten survivors. On top of all that the script is a little too clunky for comfort, the performances occasionally fall flat and there’s a bizarrely out of place industrial electronic score blaring during the action scenes.

But despite all that, Go North is still enticing. There’s a righteous anger at the core of the film, the setting an exaggeration of the mess the baby boomers have left for us to clean up. They’ve poisoned the air and water, hoarded all the money and pulled the ladder up behind them – is a lifetime of subsistence level minimum wage servitude, surrounded by the crumbling ruins of public buildings all we have to look forward to? Ogens argues that, even if it is, we’ll emerge stronger, finding new ways to live, shorn of the baggage of the past.